Can the body face north? What are the ashes and the Ganges? “Goodbye” is a montage of scenes offering moral lessons in Hindu traditions and rituals

In ‘Goodbye’, director Vikas Bahl tries a ‘Piku’ with Rashmika Mandanna and Amitabh Bachchan, but he was unsuccessful.

Faced with the sudden death of a loved one, parent or spouse, people, numbed by grief, often wonder about the meaning of existence. They ruminate that death and suffering are unalterable truths of life. Yet, desperate to find any sign of the deceased still on this earth (even as a spirit), they wonder about the soul’s journey after death. Will elaborate religious rituals and traditions help the dead gain salvation?

There’s also another nasty thought – that they never gave the dead enough of their time when they were alive. How they can never contact them one last time to share something. It stings for a long time.

Goodbye, the new Hindi film starring Amitabh Bachchan and Rashmika Mandanna, takes you to this philosophical and religious zone. The backdrop of the film set in Chandigarh happens to be the funeral rituals of Gayatri (Neena Gupta), the wife of a grieving Harish (Amitabh Bachchan).

On Death and Rituals

There is no real drama here, except when it is necessary to announce to the four children the death of their mother following a heart attack. And, they have to go home from Mumbai, or the United States or wherever they are, to attend their mother’s funeral.

There is father-daughter friction between Harish and Tara (Rashmika Mandanna) but that also strangely dissolves after the interval without explanation. There are memories of the playful Gayatri who enjoyed drinking and smoking, and the bonding force of the family. But the film spends more time on the funeral, explaining why a deceased person has cotton stuffed up their nose and whether the body should be kept facing north.

No one has an answer when Tara asks why a girl can’t also light the funeral pyre. But that’s just a random question probably slipped in to appease the viewers. After all, director Vikas Bahl was accused of sexually harassing a woman on the sets of his acclaimed star Kangana Ranaut, Queen.

Goodbye is more concerned with enlightening the public on the meaning of “Hindu” rituals. Tara, who is a non-believer, must be made to understand why a dead man’s ashes are submerged in the Ganges. And, we hear the story of King Shantanu of Hastinapur and his beautiful wife, who killed his newborn babies by drowning them in the Ganges, through a sort of comic book visual narration Amar Chitra Katha.

There is also an argument about the eldest son needing to shave his head since he has an important council meeting in his office. Children do not want to make sacrifices for the dead because they are not convinced that it will really help their salvation. Eventually, the eldest son (Pavail Gulati) ends up shaving his head to please his father.

Unlike the brilliant Hindi film Ramprasad ke Tehvriabout the changing dynamic between family members after the death of the father, Goodbye doesn’t get into children’s lives – we know that Tara is a lawyer and won her first case and has a boyfriend Mudassar who lives with her, which is a bone of contention with her father.

The other sons have jobs but they’re in the movie to get the message across that the younger generation needs to align with the sanskars from an Indian family. 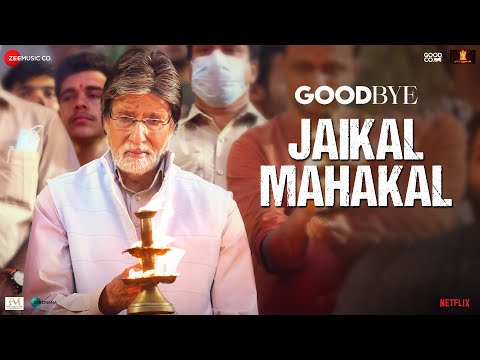 In short, Goodbye is actually a montage of scenes on Hindu traditions — a moral lesson on Hindu customs. There is also a song about life and death being part of a person’s life, against the customary beautiful evening aarti on the steps of the Ganga ghat in Haridwar. The song Jaikal Mahakaalsung by Amit Trivedi and Suhas Sawant, is very similar to Om deva deva namaha number in brahmastra.

What about Hindu imagery?

I can’t help but wonder if this heavy dose of Hindu religious imagery in Hindi films is a way out for Bollywood to appease the Saffron Brigade.

The film’s non-religious gem finally comes from Bachchan’s character, when he explains to his children what he thinks happens to the dead. It’s a beautiful JK Krishnamurthy genre philosophy, one that stays with you long after the movie is over.

Undeniably, Bachchan takes this film many, many notches higher. In some scenes, as a sad husband, grief visibly sitting on his shoulders, he is a complete natural.

Bollywood debut Rashmika Mandanna stands up to the legend. Bahl tries a Piku with Rashmika and Bachchan but he didn’t succeed because he doesn’t have enough water to carry out this track.

In Emmy Award-winning biting OTT satire white lotus, a spa employee attempts to calm her wealthy and anxious guest (played brilliantly by Jennifer Coolidge), by singing the Gayatri Mantra to her. It seems incongruous for a Hawaiian woman (with a horrible accent) to sing this mantra to a spoiled wealthy American in a resort setting, but isn’t it amazing that he even found his way there?

Of course, Indian filmmakers also think it’s cool (and necessary) to look to Hindu culture as material for their films.