“The problem is our people who don’t listen, they always sabotage our programs. When political leaders fight government programs, it’s the people who suffer,” he said.

“Religious leaders, please help me to expose bad politicians because they are causing problems for all of us,” he said.

Last night (Friday), the President hosted Muslims for the annual Iftar dinner at State House Entebbe. The Mufti of Uganda His Eminence Sheikh Shaban Ramathan Mubajje led the Muslims to the dinner.

Addressing Muslims at dinner and those at home via live television and radio, President Museveni, who congratulated Muslims in Uganda and around the world on completing the holy month of Ramadan, said that fasting is a good discipline which should be imitated even by non-Muslims.

“First of all, I congratulate our Muslim people for approaching the end of the fast. Fasting is a good discipline, it’s a good practice and people should know that we don’t live to eat but we eat to live,” he said.

The President encouraged Muslims and Ugandans in general to work hard both for the stomach and the pocket and called on people to follow the teachings of the NRM on creating wealth in their homes.

“Even in the Bible, Saint Paul says that if you don’t work, you don’t eat either. I want to inform you that this time we are very serious about people who do not work for the pocket, ”he said.

The President revealed that due to the government’s efforts, many families have now started to wake up, dropping the percentage of those working only for the stomach from 68% to 39% now.

“If 5 million families owning land only created 5 jobs, we would create nearly 50 million jobs. All of these families need to be involved in production for the stomach and the pocket,” he said.

President Museveni congratulated the Muslims for their union, adding that he is always for the unity of all the people of Uganda and Africa.

The president promised to keep promises made to Muslims when he recently met with a delegation of Muslims led by the Mufti of Uganda.

Speaker of Parliament Rt. Hon. Anita Annet Among congratulated President Museveni for uniting the country and its people. She called on Muslims to emulate the president on unity.

“Dear Muslim brothers and sisters, as you perform this pillar of fasting, I want you to create unity among yourselves. When we have unity in the community, we will have development,” she said.

She called on the Muslim community to embrace the wealth creation programs.

“I congratulate Muslims in Uganda and around the world for completing the holy month of Ramadan,” Among said.

The Third Deputy Prime Minister, Hon. Hajati Rukia Nakadama thanked the President and First Lady for always hosting Muslims for the annual Iftar dinner at State House. She congratulated them for their generosity.

“I would like to congratulate you for ending the month of Ramadan that we have been through and I pray to Allah the Almighty to accept our fast. On behalf of the people of Uganda and the Muslim community, we thank you Mr. President for this Iftar dinner. We are grateful to you and to Maama for the Ramadan charity,” she said.

Hon. Nakadama called on the people of Uganda to join in the government’s wealth creation efforts

The Mufti of Uganda His Eminence Sheikh Shaban Ramadan Mubajje revealed that if the moon is sighted tomorrow Saturday, Eid prayers would be performed on Sunday. He however said that if it is not seen, then Eid will definitely be on Monday.

“I want to take this opportunity to congratulate Muslims in Uganda and around the world for completing the holy month. If the moon is sighted tomorrow, then Eid will be on Sunday,” the mufti said.

Mufti Mubajje said that fasting is a pillar of the Muslim and the benefits of fasting include, helping the believer to gain self-control and also to purify themselves spiritually.

“Ramadan is almost coming to an end, but please continue the good deeds as it was during the month of fasting,” he said. 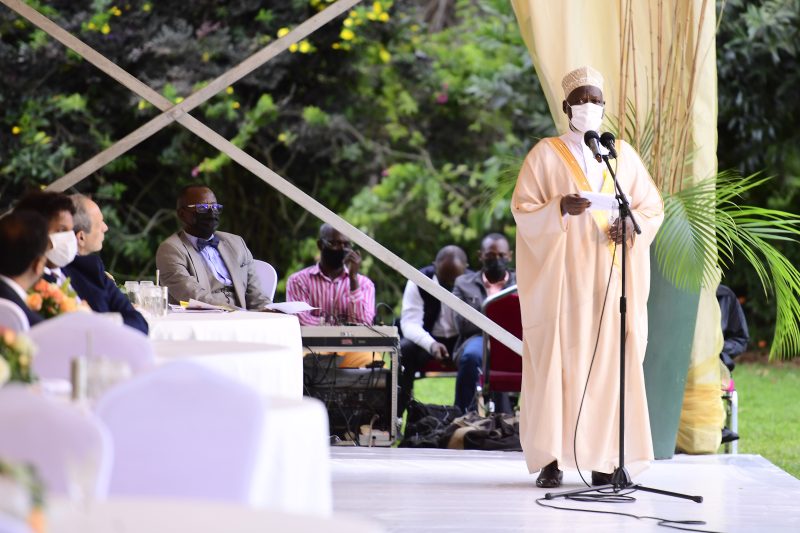 Mufti Mubajje, thanked the President for keeping this country together during the Corona Pandemic and also his efforts to unite all Muslims in Uganda.

“As you did in the fight against HIV in Uganda, you also fought against Covid-19. May Allah continue to guide you so that Uganda is stable and peaceful. On behalf of the Muslims of Uganda, we thank you for intervening to create unity among Muslims. It is a good gesture towards the Muslim community. I encourage Muslims to maintain this unity.” Sheikh Shaban Mubajje said

The mufti asked all Muslims to continue to behave as they behaved during the holy month of Ramadan and to always ask for forgiveness.

The holy month of Ramadan began on the 1st April 2022 and is expected to end on the evening of Sunday 1st May 2022.