The first non-family member to be CEO, Wout Janssens has both the tools and the vision to lead Jumbo in a rapidly changing world.

Let’s start with your background and your training. Tell us about them and what attracted you to the marine industry.

Little boy, my father bought a sailboat. From that day on, sailing became a part of my life – and it still is! We were still on the water, going out early on Saturday morning and coming back on Sunday evening. This is where my love of the sea comes from.

As for my education, I went to the Technical University of Delft to study aeronautics but I was already so interested in yachts and other ships that I switched to maritime technology after two years. I did an internship at a shipyard, but found that while I loved technology, shipbuilding wasn’t really my passion – in part because the industry seemed to be changing at such a fast pace. very slow. So, for my graduation thesis in hydromechanics, I spent a year at Rockwater (then part of Brown & Root) in Aberdeen, researching offshore crane operations, which I found very interesting and stimulating.

I joined Heerema, a major offshore maritime contractor here in the Netherlands, as a naval engineer – great job as it meant I was involved in many projects, if only in a small aspect of this one. From the start, the company gave me a pretty big responsibility and I have been abroad several times, which has been a great experience.

As a marine engineer, I was there to give advice on lifting operations. I quickly understood that when you give advice to a superintendent or a captain, you have to realize that you are only a small part of the overall project. Your contribution may be important, but it is still only part of a long and complex operation. You should never become too convinced of your own opinion. Advice is just that – advice – given professionally and with good intentions, but advice is not instruction in disguise.

This is also how I operate as a manager. I can help and influence, but I want employees and colleagues to make their own decisions. Facilitating specialists is my role. And I am a strong believer in consensus building. We do things as a team. If everyone else is of a different opinion than me on an issue, then I’d better listen or come up with better arguments first and not make my own views unilaterally.

Okay. So what led you to Jumbo?

I’ve done a lot of cool things at Heerema – I’ve helped build parts of the organization, develop teams and more. But after 20 years, it was time to step out into the world and do something else. I was looking for something more. So I resigned.

For about six months, I thought about what I wanted to do, how I wanted to live my life, and what I wanted in my career. I came to three basic conclusions: The maritime industry has remained very attractive to me; I loved working with technical professionals, and getting the most out of people was important to me no matter where I ended up.

So I started looking, in a very broad sense, for a management position in the maritime industry. I even considered becoming a teacher in a maritime institute. I went on a “scouting mission,” so to speak, for a business that would meet my needs – where I would feel comfortable and needed. This is how I came into contact with Jumbo, and we had very interesting discussions on the future of the company and its objectives and ambitions, especially in the offshore installation. It turned out we were a good game.

As a result, I joined Jumbo in 2015 and got down to work, especially on the organizational structure and the relationship between sales, engineering and operations, making them more efficient. After first being a Manager and then Director of Operations and Engineering, I was promoted to CEO last June.

Give our readers a brief overview of the company and how it has evolved over the past 50 years. When was it founded and why?

Jumbo was founded in 1968 by Hans Kahn, an entrepreneur and visionary. In the late 1950s, as containers and pallets revolutionized the shipping industry, he developed a concept for transporting anything that didn’t fit in a container or on a pallet.

the Stellaprima and its four 12-ton derricks were the result, and thus began a long history of innovation and revolution in the heavy-lift transport sector. Every few years a new class of better, stronger and more efficient ships – with many technological advancements – has been added to the fleet.

Hans Kahn was a tough, determined man with a brilliant idea that worked, going against current events and finding a better way. Jumbo remains true to this founding principle today, looking beyond the needs of today to the possibilities of tomorrow.

We love the name “Jumbo” and the elephant logo! Who invented this and what do they mean?

It was the result of a competition! Hans Kahn asked his staff for suggestions and one of them proposed Jumbo the elephant, a symbol of strength, robustness, reliability and long-term memory (a nod to our long-lasting customer relationships) . He did the same with naming the ships, a tradition carried on by his son Michael Kahn, who until recently was managing director and remains closely involved with the company as owner and member of the supervisory board.

Who are the owners? Are you the first non-family member to be CEO?

The Kahn and Borchard families are the founding owners and the main shareholders. And yes, I am the first non-family member to be CEO.

How many offices and employees are there?

We employ around 500 people, including sailors. We have approximately 150 employees at our head office in Schiedam in addition to the main hubs in Houston and Singapore. We also operate a global network of offices with long-term agents. 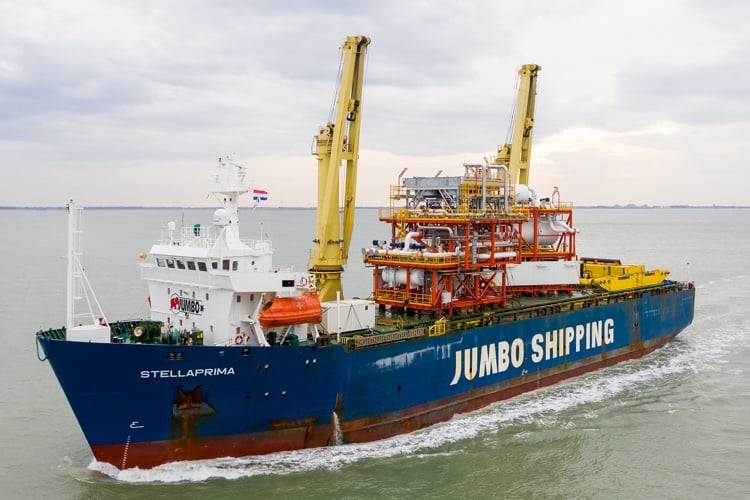 The big news recently was the April announcement of the Jumbo-SAL-Alliance. Tell us about this and its importance.

It was a watershed moment for both companies and the key to our future growth. As mentioned before, Jumbo always tried to look to the future, to see around the corner what was to come next. And the joint venture with SAL Heavy Lift is the latest example of this type of forward thinking. We remain independent businesses, but we have combined our business operations, fleets and expertise to open up a whole new world of opportunity. With a combined fleet of 30 vessels offering lifting capacities of up to 3,000 tonnes and 90 years of combined experience, we are the largest heavy-duty transporter in the world.

As Michael Kahn said at the time of the announcement, echoing his father: “To remain an effective global player in our field of activity, we must always adapt and innovate. Jumbo-SAL-Alliance is the catalyst, so to speak, for moving forward in this industry and taking our place in the ongoing global consolidation of the heavy haul market.

Wow, exciting! Tell us about the Jumbo fleet, how it has evolved over the years and what the future holds.

It’s all about continuous innovation. We develop the concepts ourselves with in-house ship designers. We always ask ourselves: what do we want? What does the market need in the future? We wanted to have access to a bigger fleet for a long time, and it has now become Jumbo-SAL-Alliance with 30 ships. Future investments in new construction of heavy transport and general cargo vessels are developed and studied.

As for what the future holds and the next step in heavy load transport and offshore installation, we see continued opportunities in renewables, infrastructure (especially ports), subsea installations and offshore and mining operations where huge pieces of equipment have to be transported to remote areas. Locations. These developments require a different approach, including vessel design, crane capacity, fuel type and more.

But given the changing market, we’re not yet done looking for the perfect next step, which doesn’t necessarily have to be a ship. It can also be a kind of service solution or contractual structure, giving us access to the right equipment at the right time. There are plenty of possibilities!

Jumbo’s slogan is “A Reliable Force”. What does it mean?

This means that we are a reliable company in every way – from an engineering perspective, as an employer, commercially and in our long-term customer relationships. This means that Jumbo is focused on hauling heavy loads, has the strength to take on the biggest and most difficult projects, and we are a strong company with the culture and the means to survive for the long haul. – and we have certainly shown that by surviving many tough times over the past 53 years!

Remarkable! One last question: what is your biggest challenge at the moment?

Survive and adapt in a rapidly changing world. This is also where Jumbo-SAL-Alliance fits in perfectly. Global developments – technological, political, economic, social, environmental – are changing very rapidly, and it is a challenge not only to keep up with this transition but also to stay ahead commercially in the long term.

As CEO, my role is to stay the course of the business. I don’t expect to have all the answers – I depend on my team for this, and luckily we have a very good team. As I said earlier, I see myself as a facilitator, a consensus builder. My role is to facilitate the progression and development of the company. I’m also an engineer, so I understand the details of very technical projects, and that’s a big help. Hope this is a winning combination!

Tony Munoz is the magazine’s publisher and editor.

The opinions expressed here are those of the author and not necessarily those of The Maritime Executive.